Warning: This blogpost has been posted over two years ago. That is a long time in development-world! The story here may not be relevant, complete or secure. Code might not be complete or obsoleted, and even my current vision might have (completely) changed on the subject. So please do read further, but use it with caution.
« PHP's Resources and garbage collection Yearly mail routine »

After buying a secondhand generic Rabbit laser cutter, I immediately fell in love with laser cutting and engraving. It really rocks, you can make really neat things and we even use it for promotion for my company. Awesome stuff, but our laser cutter wasn’t good enough: it’s a pretty cheap chinese manufacturing, with buggy software that only can communicate through a LPT port (remember those, me neither). So we decided to take a look around to see if we could find a better cutter, and we came out at Full Spectrum Laser. We decided to buy a laser cutter from them:  - worst - decision - ever..

First of all, the machine itself is ok.. At least sort of,..  We just don’t know for sure..   But let’s start with the beginning.

After looking around for a bit we found an affordable cutter on website of Full Spectrum Laser. It looked nice: big enough bedding, some extra features we could buy later on (like engraving on round objects), smaller lenses for finer  engraving etc.

After some bit of calculation, we decided to bite the bullet and order a laser cutter. To be specific: we ordered the 40W LV-DLX Hobby Laser Deluxe together with a beam combiner. We were in luck, because we got a free Air Compressor and Free 1.5” focus lens. Awesome! This deal sets us back $2650. Which is a lot of money. Unfortunately, that’s not all we are paying. Since we are importing the laser into the EU, we need to pay some customs and VAT (at a total of 500.25 euro, which was 100 euro less than I calculated myself).

But all this 80lbs/37kg of printer has to be transported from Las Vegas all the way to the Netherlands. FSL uses FedEx as their carrier, and they charge 550 dollar for transporting a machine to Europe. That’s a lot of money: almost 25% of the costs of the actual machine! Yikes! Transporting a machine over 8600 kilometers is not a small feature, and laser cutters are fragile.. VERY fragile. And my experiences with FedEX aren’t that good to begin with.

The laser itself is just a big glass tube and knowing the way carriers handles packages, I didn’t took any chance and added some extra insurance to the transport. 30 extra dollars for insuring the package for damages. At least I could sleep well.

After a few days and dealing with customs, the machine finally arrived. And what we saw just shocked us.. literally: 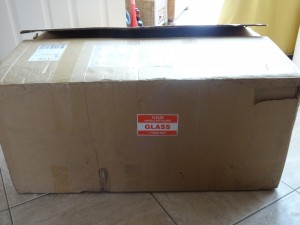 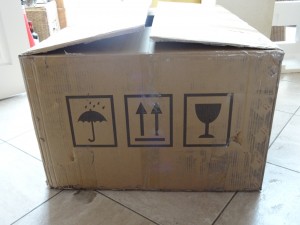 In all fairness: it doesn't say you can't play soccer with it. Just not when it's raining.

What-the-hell!???  It seemed that the box was in the path of a stampede of wild animals, or maybe it has been used as a football in some soccer match. In any case, it did not look like ANYTHING you would expect. Even I look better after flying 8600km’s!

Remember that I paid for some extra insurance for transport? This means that the package comes with a “shockwatch” label. These labels are cool things. Whenever a shockwatch label gets exposed to a large shock, the label will color red, indicating the label (and thus the package where it is sticked on) has suffered from large shocks: falling, not handled with care, you name it. 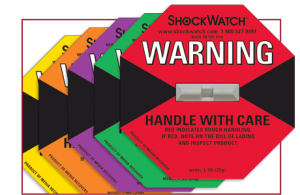 A shockwatch label. At least, I think they will look like this..

Fortunately, FSL has given some specific instructions when the package arrives: READ ME- Shockwatch Letter These instructions we should check if the shockwatch indicator has turned RED. With a package looking like that, it MUST be turned red.

But looking everywhere on the package, there is no shockwatch label. Nothing, niks, nada, zilch, zip, niente..  But.. we do have a big gaping hole on the side of the box: 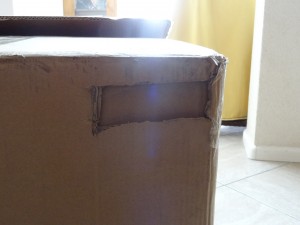 O wow! This looks like a great spot for a shockwatch label, and it seems that somebody didn’t want to see me it.. Quite possible because it has a certain red’ish color, maybe?? Or maybe it’s just to keep laser nice and cool during transport?? I think not..

So, what the hell is going on? I have a beat-up box, with a cut-out shockwatch so I can’t verify what’s happened. I receive lots of package, pretty much every week, and never i’ve seen a package in such a horrible. How the hell would the laser inside the package actually look!?

Schrodinger has got the ultimate solution for our problem: if we don’t open the box, the state  of the laser is both perfect and broken..   hey.. it works with cats.. right!?  But we eventually had to open the box and see the state of our laser.. What we found wasn’t a dead cat, but more like a cat hanging on it’s 9th life.. So technically, the cat is alive.. If you are an optimistic - seeing the sunny side of things - kind of guy. I certainly am not..

A bit more than just a simple dent. 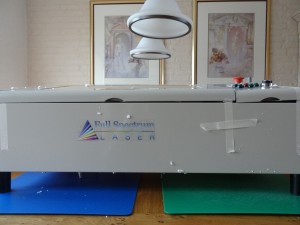 It supposed to be all nice and straight.. The leaning tower of Pisa would be jealous of these crooked lines.. 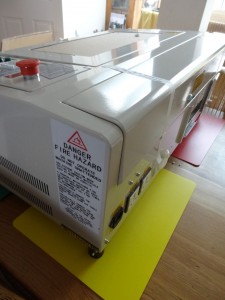 The flap is taped. You see the tension of the lid. It sticks out almost 1cm when it's not taped.

So, first thing first: let’s contact FSL support to see what we can do. At this moment, something has gone wrong, and things going wrong is normal when dealing with hu-mans, so let’s see how we can fix this. After sending a mail with the photos, the response from Jeff from FSL:

Awesome, people at FSL are thinking with me, and try to find a solution. Something went wrong, and everybody tries to fix it..

Let’s try and see if we can get the machine running. Afterall, if we can get it running, we can talk discounts and we don’t have the hassle of sending stuff back and forth with the risc of the same thing happening again..  First we checked the most important element of the cutter: the lasertube..  It SEEMED ok.. no visual damages, cracks or anything. Mind you - we aren’t experts in this area.. not much more than visually checking, looking serious and nodding with our heads once in a while is all we can do. Our conclusion: we have a better-than-average chance that the laser does not blow up in our face if we switch the power on..

The casing however, was in a worse state. The laser did not activate, as the back lid has a micro-switch underneath that must make contact with the lid. The laser won’t fire if the lid is open as a safety precaution. Same thing for the front-lid, but that lid was - sort of - ok. We managed in the end to bang (yes, literally, with a hammer!) the plates straight again. After some skilled hammersmithing work, all the switches would function, we could open the the lid of the console again (which was stuck because - crooked), and we could test-drive the laser.

So, after lots of work on getting the machine ready, we could actually try it. Pumps were working, the lasertube wasn’t leaking (our main concern that the glass was somewhere broken), the additional airpump worked, so we could try and connect the machine to a laptop.

The machine actually worked! Mind you, this is a very delicate machine that fell out of an airplane or something on the way over, so imagine my surprise.

But we had a problem: if we know for a fact that the machine had to endure so many beatings, how can we be sure that everything stays working. What about guarantees? After all, it’s like we have bought a second hand machine, for sticker-price!

A decision has to be made: do we send the machine back, with all the hassles, extra costs in order to receive a new machine (hopefully in one piece this time), or do we accept a discount and risc failure later on. Our option was the latter. Because the machine worked (and the fact we still have a spare cutter!), we decided that we could just take a discount and if something happens, we could always revert back to our rabbit cutter until we sorted out the problem.

A response from Joseph from FSL:

Hmz.. Let me see..  200$ credit for a focus lens - which we already got. That doesn’t really work for me. I don’t think there is a reason to send back the machine, as it seems to be functional. But i do think there should be some discount. First of all, the shipping costs. The actual shipping costs: 550USD + 35USD insurance + 21% VAT, nears 700 USD on shipping costs that I have spend (not considering the customs, which also is calculated OVER the shipping costs). Considering there was no securewatch sticker present anymore on the package, and considering the state of the package + its contents, FSL should file a claim with Fedex. If we consider the working of the machine, everything seems to be in order, and with some TLC (including a hammer), we got everything bend back and working correctly. So i think we can just leave it like that. Also, maybe instead of refunding, we could convert this into store credit for additional parts (like laser tubes).

So, after receiving nothing again for a while, I’ve mailed them again, and got a response back from Mr Joseph again:

Pretty much, my thinking is like this: something went COMPLETELY wrong with shipping through FedEX. I never like that carrier to be honest, but this is not my problem. However, FSL made it my problem. They should (and can) reclaim a refund at FedEX. That money is not FSL’s, it’s mine! I’ve paid it to ship it over. So if that gets reclaimed, it HAS to get back to me, obviously. Next up: i’m not doing business with FedEX, FSL is..I don’t need to wait before THEY get a refund, before I get this refund.  This would be the same as me going to grocery store and telling them I don’t pay for them right now, because I my wages  from my employer isn’t in yet.

Anyway.. I think my claim is fair: I want the shipping-costs back. I don’t even need it as a refund, but store credit is fine (we *WERE* thinking about buying a rotary, but obviously, that ship has sailed).

Mind you, FSL is a company that “gives away” free lifetime laser tubes EACH MONTH as a contest, handling actually paying customers seems to be out of the question.

After 5 months of dealing with this issue, I gave up and decided to take a different approach. I don’t need their discount, store credit, or ANY business from FSL *EVER AGAIN*. My advice to any readers out there is: don’t buy from them! If this is the way they handle customers, it MUST reflect on their products as well..  My goal in life is to tell enough people about the issues I’m having with FSL, and at least try to get european customers to move to other companies to buy their laser cutter. Everytime we go out there and have interested people asking about it, I tell the story and give them alternative companies to buy from. Maybe in a year or 2, this laser will be our spare laser, rusting somewhere in our storage room while we are working happily with a laser from a company that actually CARES about their customers…